After reading the latest missive from GG I just couldn’t help myself. I’m sure he’s a good trader but bragging about a winner and making fun of (his perception) of another person’s possible misfortune is pretty sad. Here’s his post followed by my response…

$KOLD finally sold my shares on this parabolic move at 218 and change this inverse levered ETF ( see earlier post on CC attempt sale) ; now that’s extended ; check out chart BTW $BOIL hit yet another ATL as is down well over 90% in year ; funny how so many traders here argued very aggressively that naked put sales when ETF was 100 -125 would make money in the end ; now that ETF is down 90% since they’re no where to be found ; now I know these trades were likely all closed out for huge loses in many cases yet not single post I saw on the related losses ; bottom line = selling naked options on commodities experiencing multi-year downtrends can end a trader up in the poor house no matter how much contra option selling a trader attempts ; not to mention outsized tie-up of capital which is losing money on these ETFS many of which aren’t marginable ; don’t get me started selling naked options on illiquid securities like $KOLD ; traders should just avoid these types of trades like plague ; this is the 2nd year in year many of these same traders made this costly mistake on thesis don’t worry winter is coming Nat gas will go up when it gets cold ; arrogant to assume IMO that wasn’t already priced in market IMO. BTW Nat gas hit seasonal low last winter ( Jan/Feb)when Northeast was experiencing record and sustained cold. El NINO pattern warmer than expected long term continues to crush this commodity as it makes daily multi-year lows with IMO zero signs /technicals in charts that bottom is near ; look at charts of $CHK and $SWN the two Natty gas big boyz YUCK!!!!!!!

@GreenGhost $KOLD $BOIL – I’m still here…LOL Not in the poor house yet. You’re right…this KOLD is a thorn in my side but talk about a learning experience in damage control! Luckily stayed very very small. By the way…great trade going long on it!

How’s this sound? Not saying it’s great but desperate times call for desperate measures. Looking back the original trade was a BeCS that moved bad against me so made the mistake of closing the long protection and taking the big profit on it figuring I could work the short side with puts and rolls.

As it continued moving against me I sold ITM puts and continued rolling them keeping them slightly ITM all the way up while rolling the short ITM calls up and out to Jan. Eventually the width of the inverted strangle was equal to the total premium I had received (61 dollars total). At that point I started buying ATM calls totaling 100 deltas since the ITM calls were now at 100 delta. I eventually switched to stock since it’s a little easier to get in and out of.

So at this point this thing could go to the moon and my position will remain the same…long stock covering calls with 61 bucks premium in my pocket. I’ve got a little cushion on the stock to the upside as well so I can hang onto it until it starts dropping and still unload it for additional gains.

Downside is the buying power it’s tying up which isn’t the end of the world. Even if I have to hold this thing for 2 years while rolling the short calls up every month I’m still looking at 25 percent annualized on margin or even better if this thing pulls back sooner. Can probably still juice the returns even more by selling really safe puts each month…not to mention what I’ve added to the bottom line shorting BOIL calls all the way down…(I don’t ever short BOIL puts!)

So there ya go…things aren’t always as they seem. I know @Iceman is still in it and @JeffCP is in a similar position as me…even though he resigned his OMM membership we’ve been able to stay in touch on a few trades.

I know, I know, just going long would’ve been smarter and better. Guess I’m an idiot at times!…LOL Trying to make a little lemonade out of this lemon.

Spike spikey.. this one may never go down again. IMHO traders think they are smarter than market… global warming means no one will ever need Nat Gas again; easy to see 500 in the cards. See my previous posts going back to the 80’s on how to avoid this. Newbies may have face ripped off!

(For those who were not members of OptionMarketMentor, that was a reference you won’t get, but just know that it is funny)

And now in all seriousness, as Iceman indicates, these things can have violent moves. Look at Monthly chart of $KOLD and see what happened last time we got this high. If you aren’t trading this, don’t start now! I am rolling out of my December short calls in various ways, including rolls to new calls, reverse rolling to puts, buying stock, and selling new puts. I have also closed some puts for .10 & .15, which releases about 5K in margin per option!

$NFLX #ShortPuts #DoubleDip – in an attempt to convince the stock to stay below 120, I’m replacing the short puts I covered this morning with Short Dec 18 109.0 Puts at 0.23.
I don’t see the stock breaking below the 115 low set on Monday’s pullback or breaking the 50dayMA currently at 113.84
These expire Friday

$KOLD Many thanks for the nat gas discussion below started by Ramie!

Prediction for tomorrow: It looks like another Fed leak. They raise to 0.25 but basically say “we’re not going to raise again for many months.” I have heard some people talk about them raising as high as 2% in 2016, but I still believe after this raise the next move is a cut back to 0 and possibly into negative rates with continuing economic weakness. Not sure if new all time highs will print by year-end but not that unlikely.

The Downside Warning was reinstated at the close on May 13th. 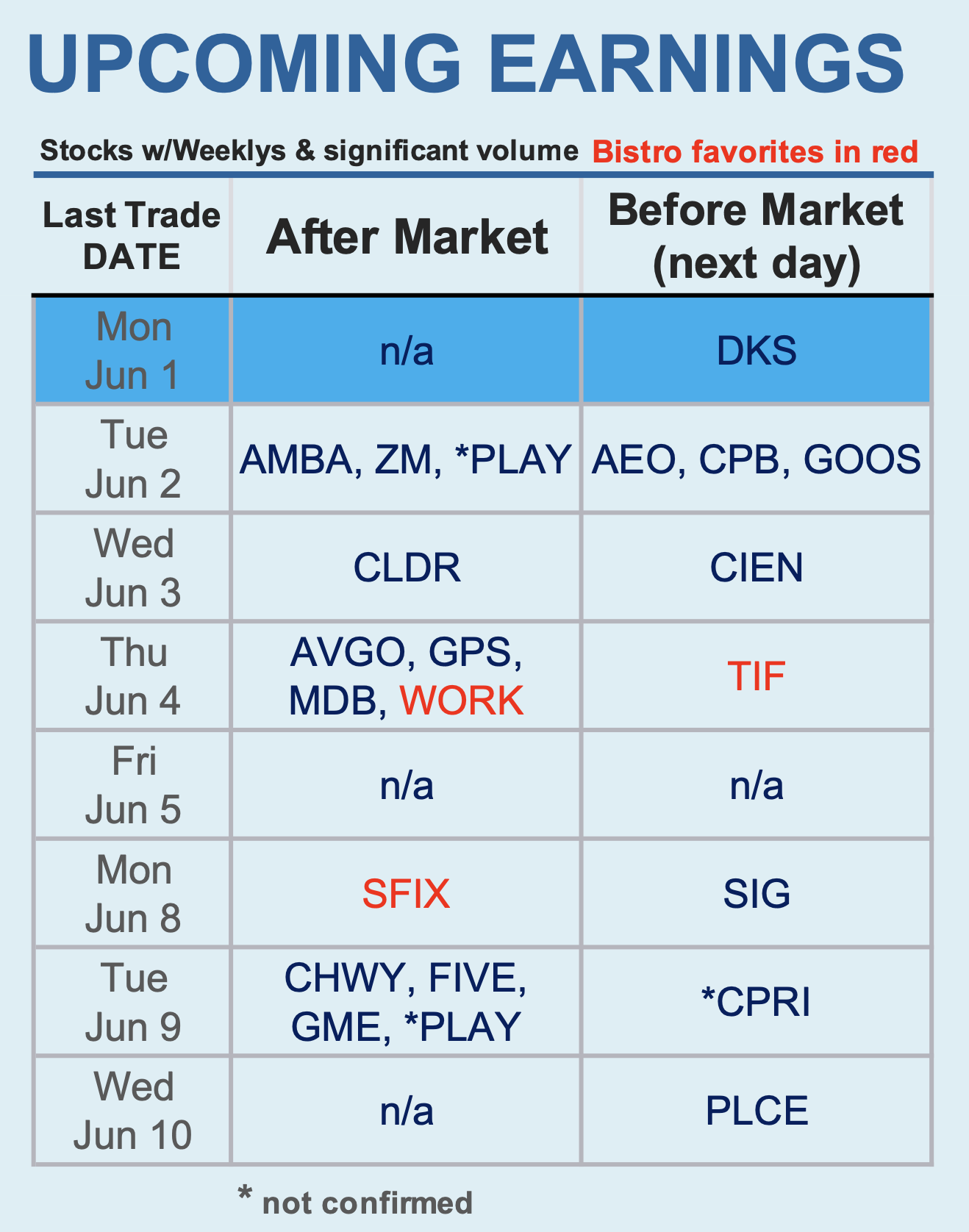 The Downside Warning was reinstated on May 13th.

Tuesday’s levels to watch:  further Downside Warnings will fire with closes at 34.39 and 46.83.  The Warning would be canceled with a close at or below 18.92.  Click here for more info on the VIX Indicator.